Posted on June 26, 2021 by UponTheFaceOfTheWaters

So we are talking about magical rituals to harness the powers of animals. (Not black or white magic, just magic, neutral, until used for good or ill by the adept. Please keep this in mind at all times, that magic and occult can be used for great spiritual attainment, but what we are going to witness in these shows is a very grotesque skewing of the symbols). In my recent video decode of the show Shadow and Bone we saw how they hide knowledge of these rituals in plain sight; specifically with the attaching of animal bones to the human vessel: 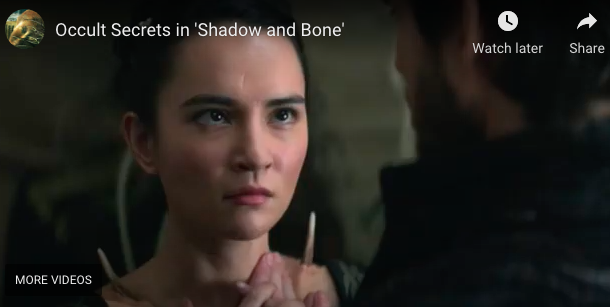 Note the stag antlers attached to her collarbone. Now she can harness the stag’s powers. Ken Grant says that the ancient Egyptians symbolized the harnessing of said powers as the Dog of Set (Sirius) and also the Ape of Thoth (who was a moon God): 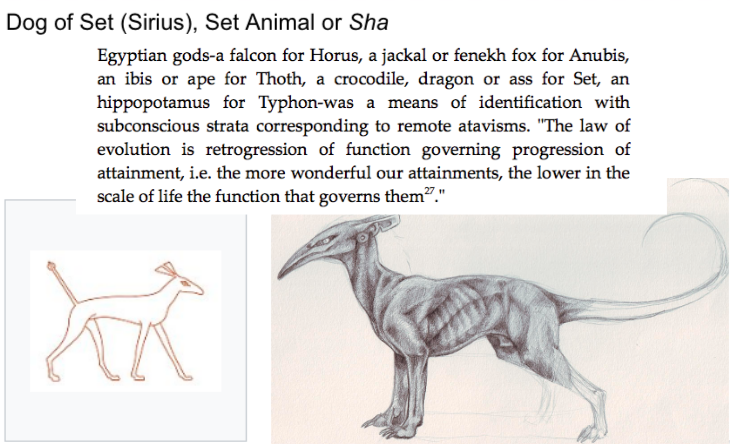 Grant writes, in “Aleister Crowley and the Hidden God”

The ape typifying the link between man and beast. So now let’s get into the show about human-animal hybrids.

The show is brought to you by Warner Brothers (they’re warnin’ ya’!)

There are a few Code 33‘s hidden in the next shot as well, if you can spot them:

Sweet Tooth – S.T. Space time rituals. Tooth – Thoth, the Ape of Thoth as glyph for this form of magic (through the Daath portal into the abyss of space, outside of linear time)

The leader of which rescues the boy, nicknamed Sweet Tooth, he is a human-animal hybrid of deer form (UNGulate [ANG], like the stag [see Shadow and Bone], he is our poor MK Ultra victim, the sacrificial goat, scapegoat)

She has brown smearing around her eyes, brown eye  = anus (ritual sodomy).

The group lives in an abandoned funhouse. They enter through the serpent’s mouth, and like Alice going down the rabbit hole, we enter a trance state, brought on by MK Ultra techniques: 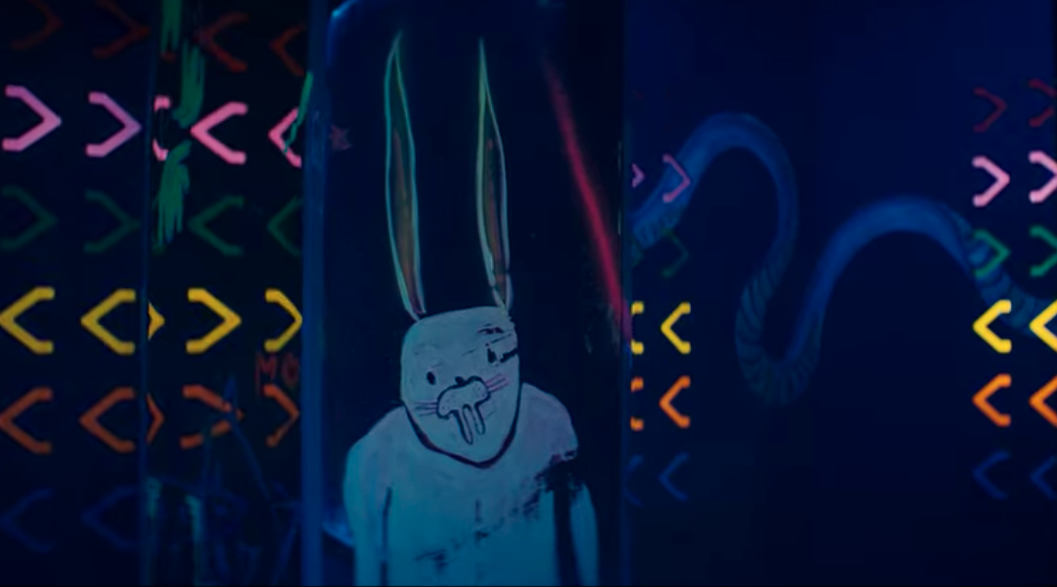 The bright, rave-like colors evokes the trance state of the programmed multiple.

Ape of Thoth with dog head because the Dog of Set (Sirius) is also a symbol for the fall through Daath. And sure enough right after the orangutang shot we see the jackal:

The group leader tells the boy,

She’s the leader of the A.A. (perhaps a nod to Crowley’s inner order by the same name)

The hybrid boy is treated as a royal guest, offered soda and candy:

They put a crown on the boys head. That is the crown chakra that gets illuminated during ritual sodomy of children MK Ultra victims. If it is before the age of 5, they have a premature kundalini awakening. That is why the crown is tilted, it’s a perversion of the natural awakening process. 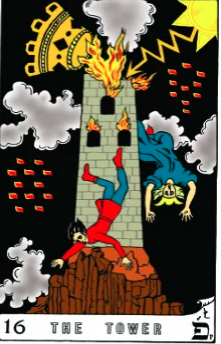 In tarot the tilted crown represents the false ego, built up by the world of appearances (tower of babel).

See how the occult gets criss-crossed with black government projects like MK ULTRA? Their point of intersection = Satanism, or SRA (Satanic Ritual Abuse).

Now, the boy says that he used to eat syrup which is how he got the nickname “Sweet Tooth.” But of course syrup comes from the sap of a pine tree (pineal gland, where adrenochrome is harvested).

The lightning of The Tower card, knocking off the false crown. The lightning flash of Qabalah (from Kether the Crown, down to Malkuth at the bottom) 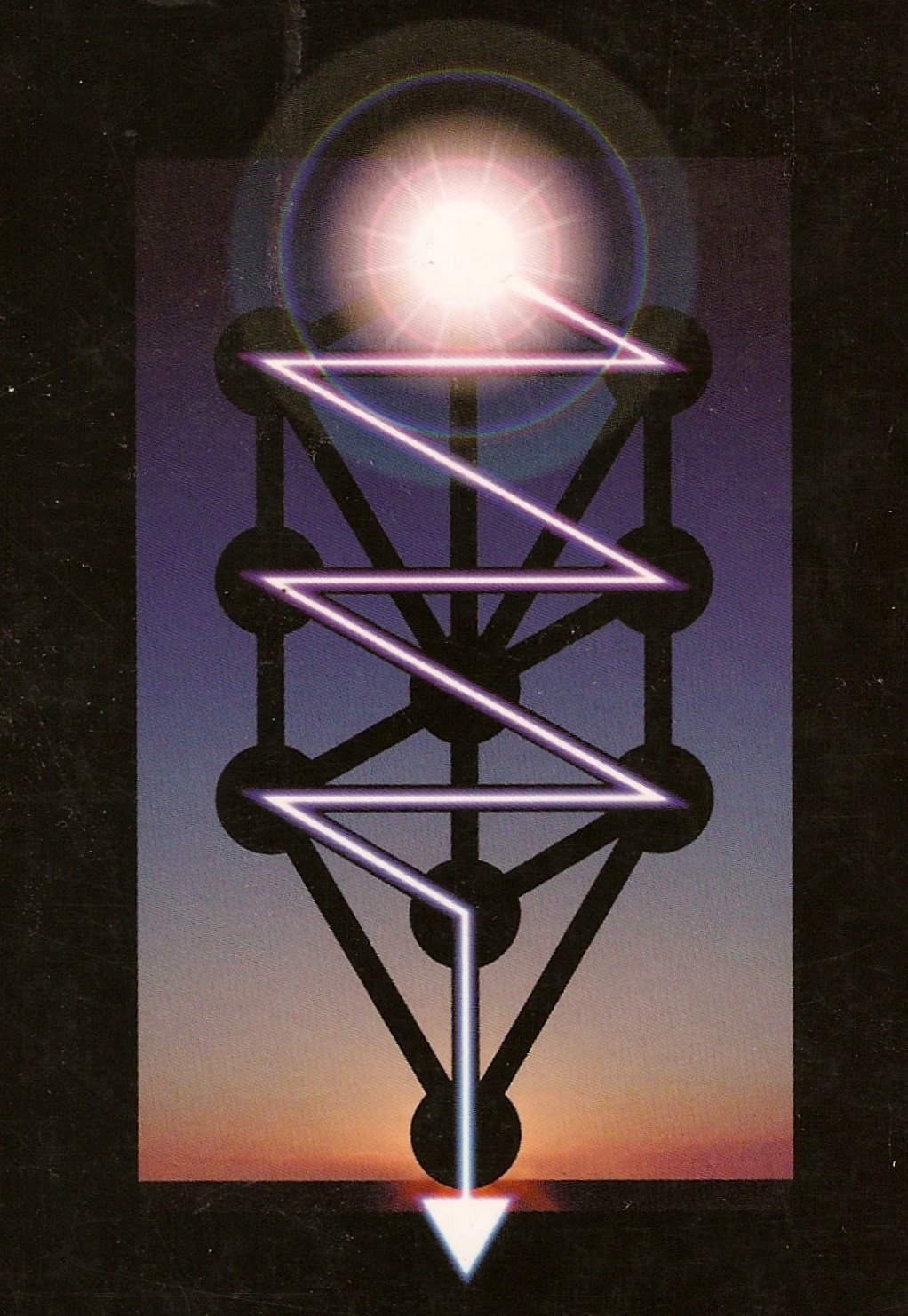 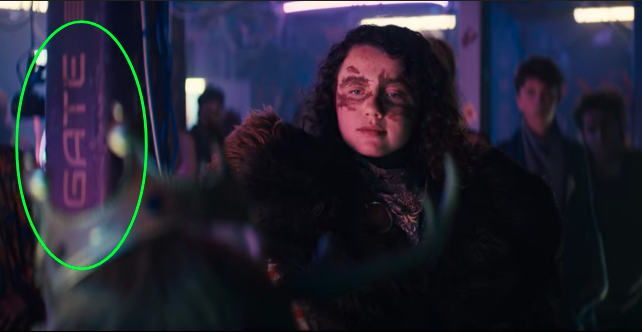 The very next scene they are playing bumper cars. “Bumper” is slang for the rear end. 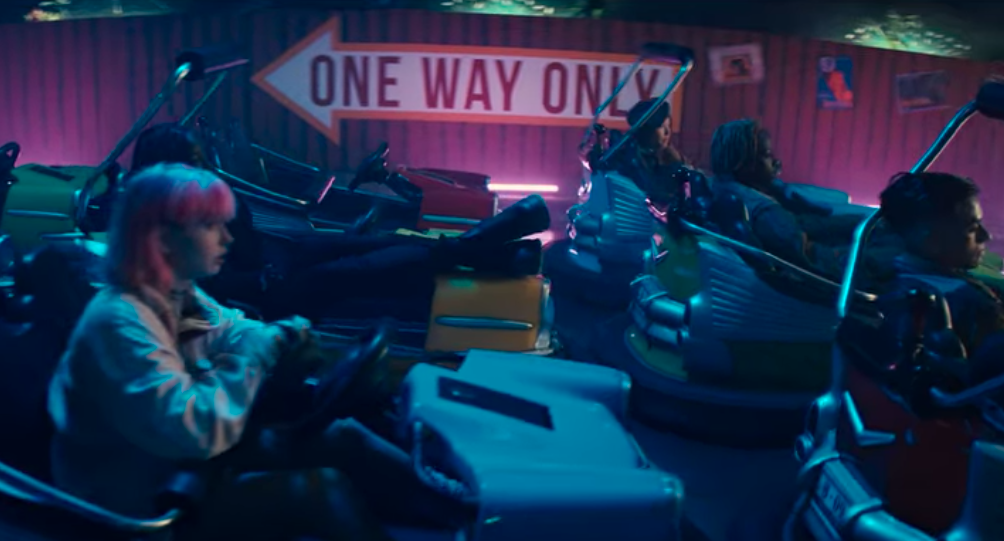 Notice the ONE WAY sign pointing left, the left-hand path.

They sit in their bumper cars and watch Warner Brother’s cartoons, “Merrie Melodies” – MM = 33. The logo being inside a red portal or anus or trans-dimensional gateway into the abyss of Daath.

Keep in mind this is all within the first 15 minutes of a single episode. Netflix, Hollywood, etc. is completely SATURATED with this stuff, but you only see it when the cover spells are removed, through symbol recognition, and knowledge of the occult. Once you learn their codes, you can’t unsee it. It’s all a perversion of the holy inner mysteries, of White Tantra, and literally smearing it with feces and butt jokes and references to pedophilia. If you are new, I’m sorry to have to be the one to tell you this.

The scene switches and we follow the character Dr. Singh. He is trying to create a vaccine for the killer virus that wiped out most of the population in this post-apocalyptic scenario. (More germ theory [hoax] conditioning, and apparently they started filming this right before COVID hit. Uh huh, sure. Just a coincidence).

The number ‘33’ by the way, is graphically a bird’s-eye-view of butt sex. It’s also the 33 vertebrae of the spine, which channel the ‘lightning flash’ of the serpent energy.

When I saw him go into the MC 33 building, I said to myself, “uh oh, something big is coming…”

Sure enough, they really spill the beans with the next bit. Inside the lab he reads the journal of the scientist whose work he is to continue. The viral antidote comes from: 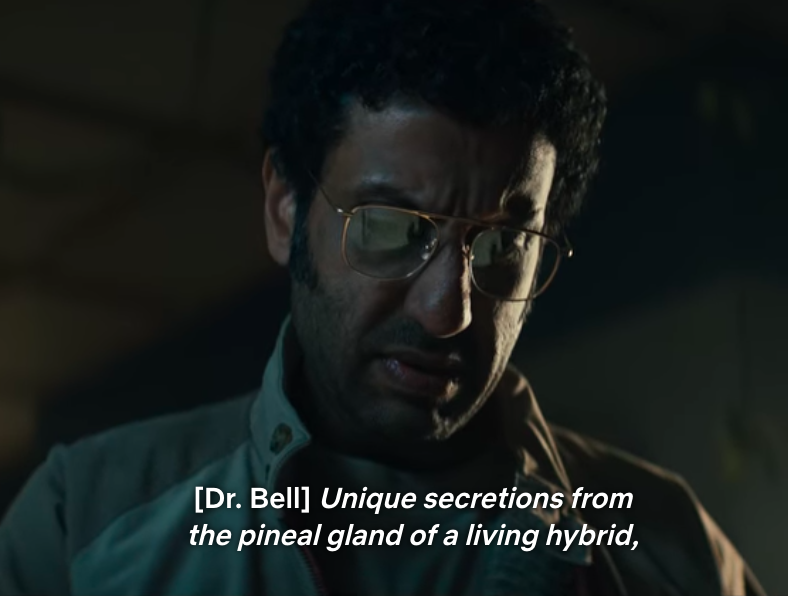 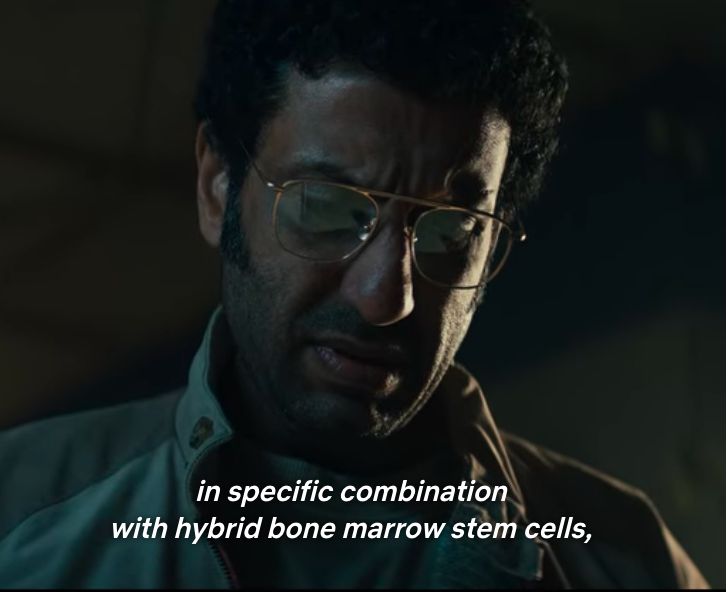 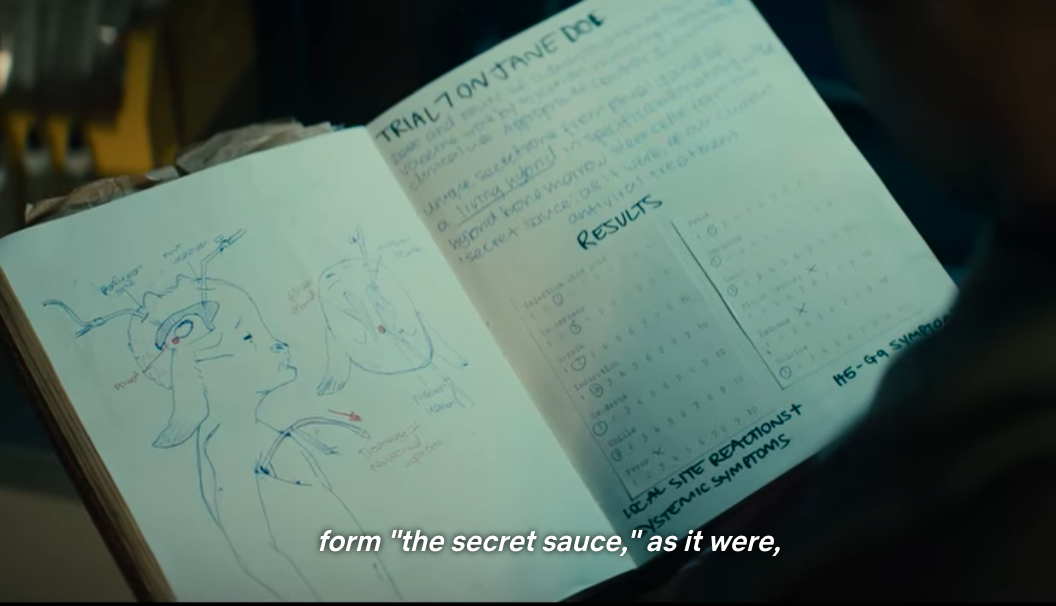 The pineal gland secretions form the “secret sauce” which sounds like something out of Pizzagate and is also S.S. = 88, Code 88, signaling time/space dimensional transiting, because the abyss through Daath and its demon inhabitants exists outside of our linear timeline.

If you look closely at the journal sketch above, one picture shows them drilling into the skull to reach the pineal, but in the sketch on the right, we see them drilling through the eye socket, which may be how they really harvest their adrenochrome, and one possible answer as to why we see the One Eye Bleeding so much in Hollywood (not to mention all the politicians and celebrities with black eyes.)

I’ll leave that there. Check out the show, it will knock your socks off once you know what to look for. But there are many shows and movies like this, riddled with NLP and spells. Put on your armour of righteousness, and know that this material needs to be brought into the light if it is to be dispelled, once and for all. Demons can only function in the shadows.