Posted on October 28, 2018 by UponTheFaceOfTheWaters 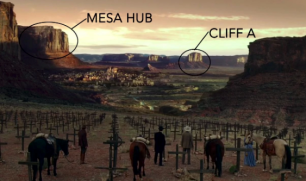 The “Park” as they call it in the show is nothing more than a giant cloning center. If you watch it with these lenses than a different narrative floats up beneath the surface narrative. On the surface it is about a giant theme park in the desert populated by androids. “Hosts” they call them in the show, but if you’ve done your research you know they are really organic robotoids, and their function is to be fucked and killed by rich humans who paid to come into the park. The park has an old western theme of cowboys and Indians.

This sounds a lot like what Donald Marshall said what was going on in these EL-ite cloning centers where all the rich and famous of the Illuminati go as REM clones to participate in acts of rape and murder. All in the guise of “death games”
“sport,”  or “gladiator combat.” When they die as a REM clone they just wake back up in their real body.

Now in Westworld, they put all the robotoids on a daily loop, acting as citizens of Sweetwater, or outlaws in the desert, each one following their respective AI programming, and were it not for the “visitors” (real humans) they would replay the same looped narratives day after day, or until the writers come up with new scripts.

Now I think it is no coincidence that the writers chose to call them “hosts” another term for Donald Marshall’s “drones:” human husks being run by parasitic consciousness that stole their body and killed the consciousness inside.

But when real humans play the game of Westworld, new story lines open up by interacting with the hosts. Everyone starts in town but the real shit happens out in the mesas and arroyos. Horse riding, battling Indians, gun play, wild parties, and lots of death. The guns are built so that the visitors can’t be killed. Only the hosts. Because the show is trying to convince us we are all itching to kill each other, spray a crowd with bullets (the lone wolf gunman narrative). So in the future they’ve built a nature reserve full of robotoids that you are allowed to do whatever you want to, shoot in the head, rape, if you can afford a ticket, that is. This attracts a certain breed of elite.

The killed hosts are brought downstairs to get hosed off and fixed up, so they can be up and running again in the park the next day. Is this all a clever way of talking about the way Illuminati victims are enslaved by REM transfer into these cloning centers where they are abused or forced to watch and participate in abuse? Because they “sold their soul?”

Now the one redeeming character in this show is Maeve. 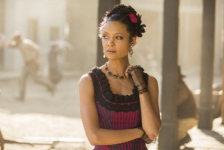 She is a mistress of the brothel inside Sweetwater pub, in the main town. Through various oversights, she is able to “wake up” during a reprogramming in the technicians chambers below the park. She is able to coerce the technician Felix to alter her programming, making her more intelligent and able to control other hosts with her voice, and befriends other hosts to help protect her. At the end of the first season, Felix is able to help her leave the Westworld park. 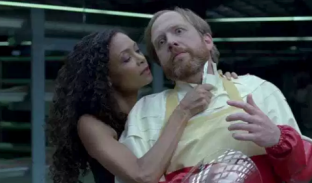 When she discovers that she and the other hosts in the park are used again and again as cannon fodder and sex objects and then have their memories wiped each morning, I could see Donald Marshall’s testimony about REM cloning hinted at. When someone awakens or being de-programmed from screen memories. The Illuminati can fuck with people by REM transferring their consciousness into a clone, torture you, and then wipe your memory of it so you wake up in your real body the next morning unaware of any of it. But meanwhile they’ve slipped in their trauma and programming.

Too much of that splits the mind, creates alters, and this theme of the “shadow” or “double” is seen with the main host character “Dolores.”

She seems sweet on the outside, but hidden within her programming is a cold blooded killer that can be triggered by her controllers. At first she is not aware of it but begins to develop self-awareness and reclaim suppressed memories, just like these MILAB’s and MK Ultra victims are sometimes doing.

But with Maeve, we see this theme again about escaping from the cloning center, we saw it in The Island, where a couple duplicate clones being used for organ harvesting inside a D.U.M.B. become self-aware and escape. 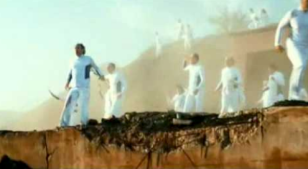 In The Island, the subliminal message is even worse, that duplicate clones are alive, fully conscious, with souls like you or I. We know from Donald that duplicates are mindless, soulless, and in a perpetual coma unless activated by a another mind in REM sleep, or else by an AI computer (robotoid), in which case it is not alive, it is a machine, however convincing it may seem otherwise.

In Westworld it’s an android who becomes self-aware, and starts re-writing her own programming, enhancing intelligence, etc.

There is a hidden agenda here to shape human thought. We should assign life and spirit to these manufactured entities, root for them escaping their cruel captors running them inside the DUMB’s. To make us more amenable to them when they finally come right out in the open with clones and hosts and droning and lizards and chiphead elites. To sway the masses one way or the other during a fake alien invasion or “intervention,” a false messiah-type event. Because the event is going to be full of these androids or “organic robotoids.” These soulless beings that look and act fully human. And maybe most of the time they’re harmless. Problem is they are programmable remotely and could be triggered by their programmers to become a deadly assassin.

The teen sci-fi book and movie, “The Host” has a similar mind control agenda. The main character talks and interacts with the alien host that is trying to take full control over her brain and body. Eventually, in this rare case a truce is sort of founded. Ah how cute, the parasite in her brain became her pal. Sickening.

“We must love our controllers.”

And this is how the 2005 movie “The Island” ended, with all the captive clones escaping the collapsing D.U.M.B.

As if to say, look out humanity, here come the duplicate clones. And sure enough in 2011 we had Donald Marshall’s testimony come out along with the various celebrity tweets and hints and now rappers B.O.B. and Kid Buu openly talking about being cloned…in this video Kid Buu even says he escaped a cloning center called Clone-Aid. And he has his model and serial number if anyone asks.Whether or not he is telling the truth, the concept of celebrity duplicate cloning has pretty much gone mainstream. And it looks like this soft disclosure around clones or androids through Hollywood is an attempt to muddy the waters around this issue, hide the REM driven stuff and just push the idea of AI clones or duplicates having souls or at least being capable of developing souls and autonomy.