Posted on July 6, 2018 by UponTheFaceOfTheWaters

Take a look at the body language of the following people: 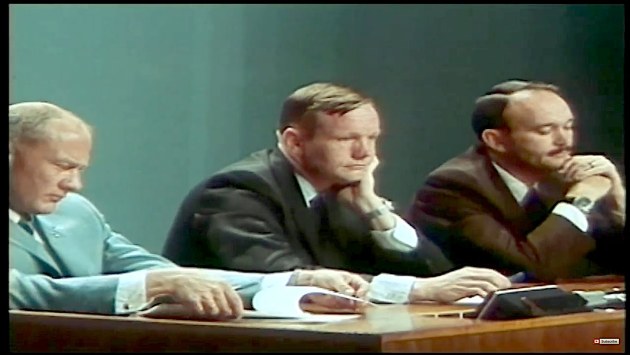 Do these people look like the heroes returning from the most triumphant feat of man and science, a voyage to the moon and back? Or do they look like three uncomfortable people caught in a lie?

As they nervously fidget through the whole Apollo 11 press conference, they make a mistake at one point when asked about what the stars looked like from the moon. 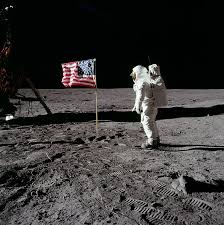 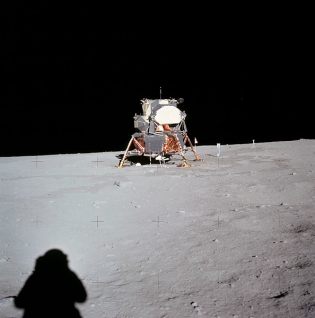 Neil replies, “I don’t remember what stars we could see.”

Really? You’d think such a thing might be of astronomical importance. Or at least aesthetically pleasing. But sure enough, no stars in the images above either. According to researcher Bart Sibril, this was because it would have been too difficult to fake the exact positions of the stars from a lunar vantage point, so they didn’t even try.

Michael Collins, to try and smooth over the awkward moment says, “I don’t recall seeing any stars.” Forgetting that he wasn’t supposed to have been on the moon at all, but stayed behind in the lunar orbiter. 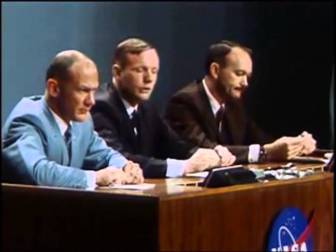 You can see Neil kind of grimace when Collins says this. 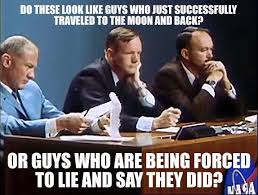 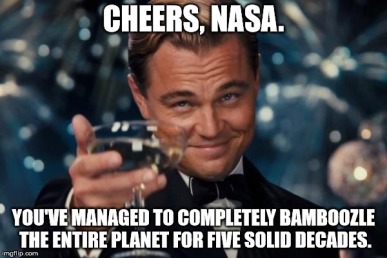 The Problem of The Van Allen Belt 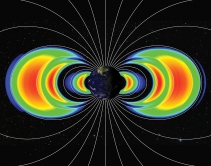 “(wikipedia) A Van Allen radiation belt is a zone of energetic charged particles, most of which originate from the solar wind, that are captured by and held around a planet by that planet’s magnetic field…

…Beyond the belts, (astronauts would) face additional hazards from cosmic rays and solar particle events. A region between the inner and outer Van Allen belts lies at two to four Earth radii and is sometimes referred to as the “safe zone.”…Solar cells, integrated circuits, and sensors can be damaged by radiation.”[28]

And yet in the 60’s before it was discovered, it miraculously didn’t affect the Apollo astronauts at all? No adverse affects? 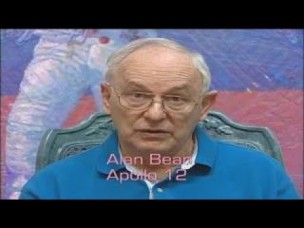 “Not on our mission,” says Alan Bean, Apollo 12 Astronaut. “It hadn’t been discovered yet.”

An astute observer notes “When asked about the Apollo missions years after, NASA told the world that they were able to go through the (Van Allen) belts with technology that they destroyed after the last moon mission. When asked if they can just build another one they responded “it takes a long time to figure these things out.” Billions of tax dollars went towards this and they destroyed it without keeping blueprints? 1st red flag. Also, when the freedom of information act was passed NASA was asked for the original tapes from the moon landing. They admitted that when they were budgeting money, they wanted to save some on magnetic film strips and they accidently taped over the greatest achievement of mankind…..the only copy. (2nd Red Flag). A space shuttle in the 90s was able to make it 500 miles BELOW the belts before they had radiation flashes in their vision, even with eyes closed. This shuttle was shielded as well. The Apollo missions were not. (3rd Red flag)(source) “ 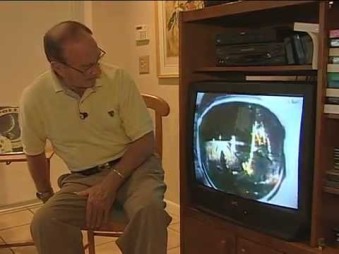 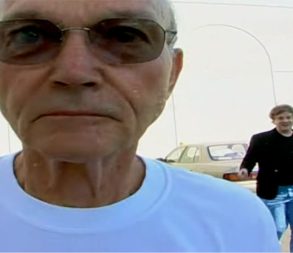 Filmmaker Bart Sibrel get’s his hands on classified outtake footage of the Apollo moon landing hoax, an outtake that shows them clearly faking an image of the Earth from the ship capsule so it seems that Earth was much further away. Bart confronts these aging “astronauts,” some 40 years on, about this damning footage and asks them to swear on the bible that they really went to the moon.

From the description section of the 2002 video: “When Sibrel publicly exposed the astronaut’s criminal behavior, he was threatened with violence by one astronaut, physically assaulted by two other astronauts, and threatened to be assassinated by another astronaut . . . all on camera! . . . revealing that these men are not the honorable “heroes” that they appear to be, rather they are a bunch or angry and violent criminals, reacting bitterly for having their evil deeds exposed.

At time 8:58, when astronaut Buzz Aldrin was confronted with his guilt by Sibrel, who showed him the newly discovered unedited videotape of the fake photography from his mission on a nearby television monitor during an interview, Aldrin accidentally acknowledged the fraud on camera (thinking it was turned off) by declaring, “And this makes you a real famous person for having discovered all this! What an ego you must have to want to propel yourself like this.” (How could Sibrel become famous if his accusations had no evidence?) When Aldrin realized that he had made an admission of guilt, he threatened to sue Sibrel if the interview was shown publicly.

At 40:29 Sibrel offered astronaut Neil Armstrong $5000 cash to donate to his favorite charity, if he would only take a five seconds to swear on a Bible that he actually walked on the moon. Very nervously, and surprisingly, Armstrong refused to bless a charity with merely a formal declaration of what is supposed to be true.

At 13:40 astronaut Alan Bean accidentally acknowledged that he never left Earth orbit, by emphatically asserting that he did not travel through the Van Allen Radiation Belts, which are at 25,000 miles beyond Earth orbit. When his hypocrisy was pointed out to him, he made a feeble attempt to recover from his error though a series of more misspeakings.

At 48:32 “Peace Activist” astronaut Ed Mitchell violently assaulted Sibrel from behind for exposing his lies, though he just said that he never hits anyone. (He can’t go 5 seconds without lying.) Mitchell then threatened to get his gun and shoot him! Forgetting that the wireless microphone was still attached to himself after he closed the door and Sibrel left, the confidential audio revealed Mitchell and his son covertly discussing enlisting their friends at the CIA to have Sibrel assassinated.(SOURCE)”

Click here for Jay Weidner’s research on how Stanley Kubrick probably was the one tapped to film the Apollo missions in a Hollywood studio.