Posted on March 19, 2019 by UponTheFaceOfTheWaters 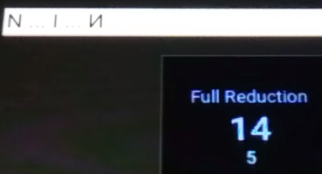 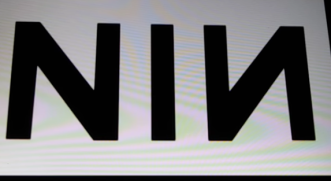 What does the heroine from the new Marvel movie, Nine Inch Nails, the number 14, John Podesta, and the recent Christchurch shooting have in common? They are connected by the language of occult numerology and gematria, which the controllers use to dangle little breadcrumbs of truth in front of our faces, as a test of how awake we are.  In this post we will, to borrow a phrase from James Bickford, “take the patterns and run, and avoid the surface-level trigger-bait of the onion.”

Let’s begin to peel away at this onion here. We had the mosque shooting on Pi day, (3/14) in New Zealand, a country that John Podesta visited 5 days prior: 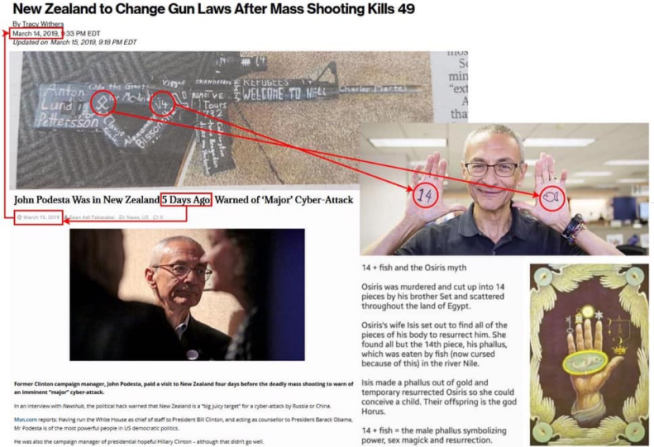 I paraphrased a Marty Leeds lecture HERE covering Podesta’s Wikileak pic where he had 14 and a fish written on his hands. Notice also how ’14’ and a fish are drawn on the machine gun used by the shooter, above.

What’s interesting is that the letter N is the 14th letter of the alphabet, and has the following gematria:

Rearrange those numbers and you get pi 3.141.

In Hebrew the letter for N is Nun, also the 14th letter, and actually means ‘fish,’ (all hebrew letters carry an additional symbolic meaning).

This all connects to the myth of Osiris being murdered and cut up by Set, his 14 pieces scattered into the Nile. The 14th piece, his penis was never found by Isis, but was eaten by a fish. So we have Podesta doing some male phallic sex magick in that pic, most likely a known esoteric riddle within their circles:

Don’t forget we have 14 phalanges or bone segments on the human hand.

There are other ways the mosque shooting references Pi as well, as Derek of Gematrinator points out: the shooting allegedly killed 49 people, and 227 is the 49th prime number. 22/7= pi. And amazingly:

The governor of New Zealand, Patsy Reddy shares gematria with ‘the circle’

The circle is where pi is derived, and the Freemasonic compass is set to 47 degrees. Compasses are used in geometry to draw circles.

At the time of the shooting Reddy was 777 months old:

Now curiously, only four days after the 3/14 shooting, the new Captain Marvel movie was released, which seems to be connected to all this through the band Nine Inch Nails.

Here is a shot from the trailer of the heroine wearing a Nine Inch Nails t-shirt: 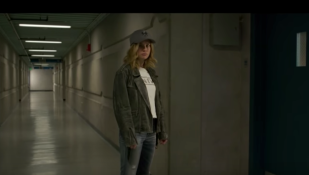 Pi in ‘Nine Inch Nails’, and in their logo NIN (the reverse N is not counted):

In those cyphers NIN is 14 and 13 like pi 3.141 like the date of the shooting, like the Osiris myth, 13 found pieces and the 14th missing piece, just like the letter N, which  is 14 and 13 in Ordinal and Reverse Ordinal. The plot thickens.

Not to mention, this Marvel movie hints about Vrill and droning with the villanous Skrulls (a parasitic, body snatching alien species from the Star Trek universe). Even Donald Marshall remarks the following on his facebook page:

He often uses a similar symbol. He points out that the Christchurch shooter apparently had Vril or Black Sun symbols on him:

So From Captain Marvel we get to pi through a NIN t-shirt in the trailer and through pi another of connection to the pi day mosque shooting/possible false flag which occurred around the movie’s release.

Now Nine Inch Nails has been shown, thanks to Zenith of the Alpha, to embed gematria and hidden codes in their work prior to all this, which is what prompted me to make this connection when I saw their logo flashed in Captain Marvel.

14 again, like Osiris and the fish, John Podesta, Nun or N, the fourteenth letter, and this time also its mirror, 41. 14 41, a palindrome read the same forwards and backwards.

It also kind of looks like 5N, on the album cover, and N = 5 in Full Reduced.