Why the Elite Made The Sun So Big

Posted on August 1, 2019 by UponTheFaceOfTheWaters 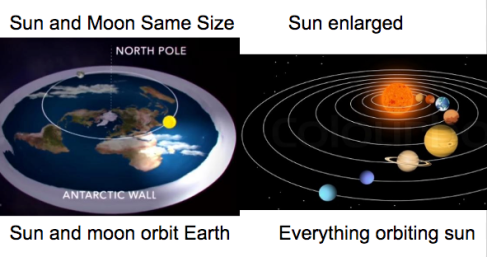 If you aren’t turned off by the annoying gatekeepers of flat earth and actually study the model put forth, the sun and moon are the same size. That’s the gold and silver coins in the sky, the moon-eye which we now use for chANGe. 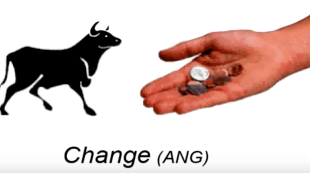 It’s the yin yang, day and night. Each partaking in a little of the other.

The elite’s heliocentric model expands the size of the sun and places it in the center to accentuate the lower mind, while defacing Lucifer AKA the higher mind.

Jesus and Satan need to be in balance, the two brothers.

Jesus, the light of the day, of action, of social affairs, taking care of family, getting food, etc.

Satan or Saturn, the light of the night, the light within upon meditation, personal. That’s where the inner work happens, the neglect of which will slowly poison your daytime activities. So you see, both are needed.

They made the sun millions of times bigger than the earth and other planetary bodies. They made everything revolving around it, the lower mind, ego. Just the same way they set up societal affairs. Glorifying consumption and greed, and playing by the rules to climb the corporate ladder.

Saturn scoffs at all these things. So does Jesus, they perverted his message too.

But Satan is the tempter, why? Because precisely when you try to go into your meditations – temptations come up to distract. So we blame Satan/Saturn. But he’s just the teacher, sometimes you have to hear hard truths from teachers.

He wants you to burn all those distractions away. Close your mind to daytime thoughts, the rabble and rumble and ramblings on. Oh how the bull carries on!

Whatever’s left when you’ve burned all those things of the cerebellum away is You. The real you thats been there all along.

There is so much room in the upper chambers, the holy of holies. The cerebrum is way more developed and extensive than the back brain, and we’re only accessing a fraction of it.

That’s where Jung’s collective unconscious is – not a great name, because its highly active, it’s not an unconscious process at all. You want to bring forth the things out of dreamtime and make it part of your daytime reality.

They made the moon only a reflector of light, not an emitter. Meaning the higher mind can only deal with items that arise out of the lower mind. It can’t provide data of its own to inform your life.

Teaching you not to rely on intuition, pay that no heed, we want reason alone! Reason that arises in the harsh daytime of lab tests and measurement and predictability. The wild swings of imagination are not encouraged in a lab setting. That’s what the elite have made this world. They took a bunch of artists and made them guinea pigs in a lab setting.

There is a reason the word ‘culture’ can apply to humans or bacteria.

The moon phases from light to dark showing you duality. Showing you that light and dark are two sides of the same coin. Jesus is Satan who is Jesus.

Careful the bull is beautiful (‘bello’ – in Italian), that’s why it keeps the animal survival-food-and-sex mind rolling and rambling.  It’s all bells and whistles. It holds you by the balls. Just look at the word ‘ramble’ which has both the ram and the bull in it.  The ram is the higher mind, but right now he’s just a lamb. And the bull of the lower-mind is charging at you. It’s quite the bully. But when you unpack those thoughts, you often find they are nothing but bull shit.

When the mind is overwhelmed by stimuli, and saturated in data, as modern society is, it can’t focus on one thing, it becomes ADD, it rambles from one thought to another, no direction involved, a sort of frolicking, just being tossed and turned in the waves. Just watch a 30 second commercial and see how they rock the boat.

The concept of spinning (rotating around the sun) evokes a dizziness. When a child spins too fast, they get a little high off all that oxygen.

You must sacrifice the bull, slay the lower mind. That’s why the jeering, roaring crowd is pacified when the matador sticks the sword in the bull, slaying it. They need to see that blood to have some relief from their lower minds. They need to see that in some portion of the world, man can conquer beast. But it’s a temporary fix, and draws blood guilt.

The way to slay the bull is in silent meditation, binaural beats, yoga, prayer, fasting and other techniques.

You have to learn to say, “Stay, bull.” And then you can be stable.

But you can’t just shut off the mind in ignorance, learn the pair of bulls (parables) code, which is all Jesus spoke, and how the elite have suckered one over on you, depriving you of the keys to the kingdom, which, once decoded, are returned to every truth seeker.

You must be a rock. You must not roll.

From Led Zeppelin’s Stairway to Heaven:

“The lady” is the Wisdom Goddess Lucy/Lucifer ‘in the sky with dia-monds.’ Or what in the Essene Gospels Jesus calls “our Earthly Mother.” So you could see it as the two brothers, Horus and Set, or you can see it as the alchemical marriage, Osiris and Isis.

“And if you listen very hard…” (meditate) you hear our Earthly Mother and she heals you and you become “one with all,” you become a “rock.”

Your ‘heart‘ is an anagram for ‘earth,’ which is also fixed and immovable, like a rock. What does the bible say about stationary earth?

Psalm 93:1: “Thou hast fixed the earth immovable and firm …”

Psalm 104:5: “Thou didst fix the earth on its foundation so that it never can be shaken.”

Isaiah 45:18: “…who made the earth and fashioned it, and himself fixed it fast…”

1 Response to Why the Elite Made The Sun So Big