Posted on August 7, 2018 by UponTheFaceOfTheWaters

Paraphrased from a Marty Leeds lecture. 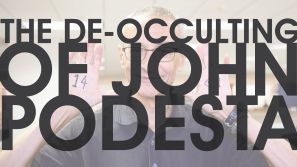 Marty: This picture had been found in the Podesta wikileaks files. For those who don’t know, he was the chairman of Hillary’s campaign, was chosen as chief of staff to Bill Clinton and was counselor to Obama. Wikileaks has released thousands of his emails to the public. We are not going to talk about the numerous incriminating evidence linking him to Pizzagate and child sex trafficking, what we are going to do is deconstruct and discuss the highly occult significance of the pic shown above.

Let’s look at the number 14 and the human hands. I have shown how the human hands contain things like the cycle and phases of the moon, women’s periods, calendars can be created with hands, and the mystical number 7.

So Johnny P has the number 14 written on his right hand. Now you’re hand is actually comprised of 14 phalanges, the little bone segments that make up each finger and thumb.

This fish on Podestas left hand is a reference to the 14th letter of the hebrew alphabet. “Nun” which means “Fish.”

The fish is created by what is known in sacred geometry as the Vesica Piscis. Which means “vessel of the fish.” The center womb or overlap is celebrated by many religions as the ichthus fish. 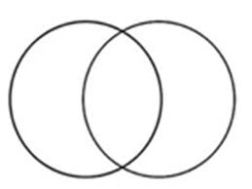 The trinity is referenced by the Vesica Piscis as well, the most notable here being the Egyptian trinity, Osiris, Isis and Horus.

Set kills Osiris and cuts his body into 14 pieces. Isis only recovers 13 of the 14 pieces, because the last piece, Osiris’s penis, was eaten by a fish in the Nile river.

13 and 14. These numbers relate in our number line to the infinite and transcendental number Pi, as well as the number 42, which has high occult significance. Here is how –

Also 13+14+15 = 42. 42 is the number of principles in the Egyptian Maat, what is known as the principles of law order and truth. Why? Because of this relationship with Pi in our number line. 42 is also the answer to the mystery of life in Douglas Adam’s Hitchhikers Guide to the Galaxy, and 42 is also the number God used to create the world in Kabbalistic study.

Psalm 89:13 “You have a strong arm; Your hand is mighty, Your right hand is exalted.”

Quotes about the “Right hand of God” appear 58 places in the bible. God always sits on the right side. This is because when you face north towards the pole star, the sun always rises to your right, in the east, hence why so many religions pray to the east.

And remember how we said that 14th letter of the hebrew alphabet is ‘Nun’ which means Fish? ‘Nun’ sounds like ‘None’ or ‘Zero’. So if we take the gematria value of the words zero through fourteen, just like we see on John Podesta’s hands, we get:

This picture has surfaced again in the recent Mosque shooting on pi (3/14) day. 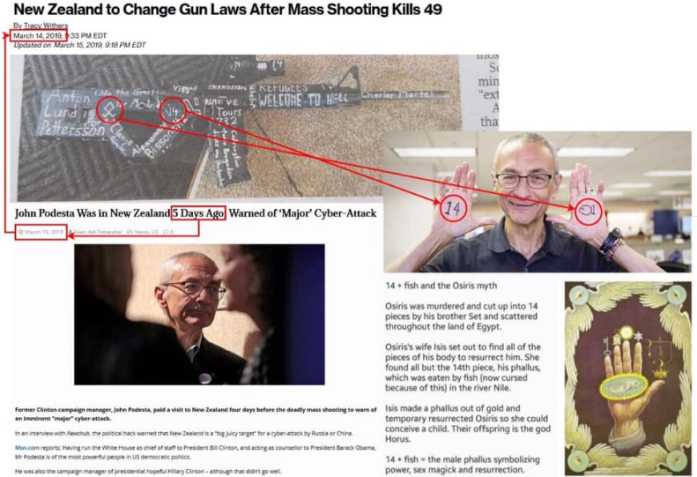 Podesta is involved in some type of predictive programming here. And notice the ‘fish’ and ’14’ written on the gun.

5 Responses to Marty Leeds – The De-Occulting of John Podesta