Posted on July 11, 2019 by UponTheFaceOfTheWaters

That’s what the Omnimind had in mind when they designed this reality.

The Bull Is Always Winged

Paraphrased from Chris Lord (part3): “And we know that ancient Canaanite  Phoenician, and Akkadian cultures worshipped the bull god Baal. And the winged bull can be seen in all their art.

The elite are worshipping the winged bull to this day. That’s Why Red Bull gives you wings. Remember that Nanna is the son of Enlil known as the moon god ‘Sin.’ He was depicted as riding the horns of the moon. Or the horns of the bull.

And Bali is named after Baal. Notice the bull headdress during the festival of these young maidens. 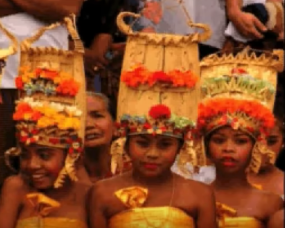 And they carried the golden white bull through parade to be sacrificed. And we see the Hindu goddess shiva with the serpent, the moon, and the bull. The cow bull goddess known as Nandi. And Nandi is the beast/bull that Shiva rides, exactly like Europa riding the bull god Zeus.

Just like the biblical great whore of Babylon and her great cup of fornication, and she rides the beast. 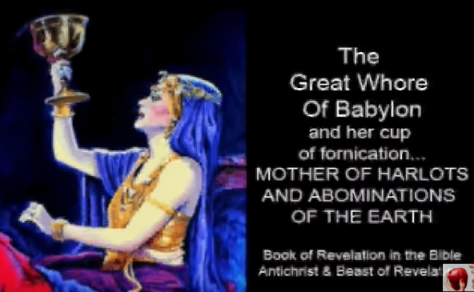 The wine representing the bull’s blood, the cup, shaped like a bowl (bull) or vessel (El).

And they took the night journey when the moon comes out, heading towards Al-Aqsa (El OX ah) which was the ‘farthest mosque.’ So we know that ‘Allah’ is the exact same god as El of the Bible. That’s why you find the bull horns or the crescent of the moon in the Islamic culture. And the mythical steed of mohammed was actually a bull , not a horse, although both of them are actually known as ung-ulates, or hooved animals. (SOURCE)“

So we have repeating themes across cultures that are very specific, once the veil of language is lifted: bulls and horns and horniness. A whore riding the bull/beast, ascending from beastliness to Godliness in your Jesus and Mohammed archetypes. The higher and lower mind. Sometimes the female has to play the lower mind, like Eve being tempted by the snake, while the male gets to play the hero ascending from carnality. But other times the archetypes switch, and she gets to be the pure virgin. That’s the beauty of syncretism, and Bonacci makes this clear in his work. The 7 Elohim are interchangeable, once you get to know them. They all get to play the greater benefics and malefics. Because it’s astrology, and depending on where the wandering stars are in the sky in relation to each other (squares or triunes) will determine their positive or negative affect on humans.

So the bull (Taurus, fixed earth – sensuality) has to grow wings to ascend out of gross matter, flesh, and remember its state as pure consciousness, one with God. 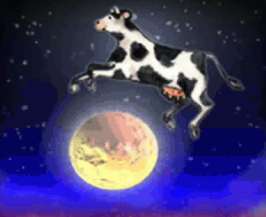 And so the cow jumps over the moon/min/mind, over the lower mind.

And not to glorify this blood sport, but that’s why the matador does his dive move over the bull, the ungulate, the angered ang of El.

And the cornerstone shaped like an ‘L’ is laid in Freemasonry, the square, (bad aspect, flesh) which you must circle (triune, good aspect, spirit). 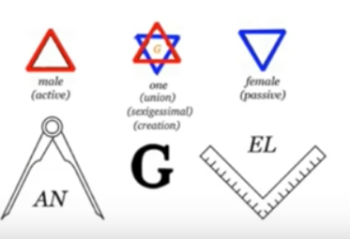 And so graduates fling the OXford cap in the air, upon graduating, flinging the winged bull or goat (CAPricorn) into the air, rising above the lower mind. 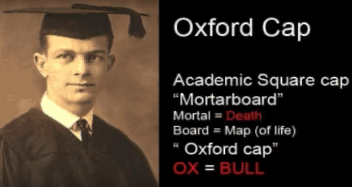 And so phALlic looking mushrooms have a cap, the same shrooms growing in cow shit that get you high, making you a red bull with wings, capable (cap-a-bull) now of communing with spirits, or with the right hemisphere of the brain.

So the bull code is not just in the words, and its not just in the stars, its even built into the very physiology of organisms. That’s why yo’ dick is shaped like a mushroom stalk and cap. (Sorry for the bulgarity folks). And women don’t have a penis but they do have a cli-torus (Taurus).

Now Cap-ri-corn the goat being another ungulate and appearing in winter-time, Hell, December the twELfth month (moonth)  when the sun Jesus is at his lowest point, incarnated in the flesh, being crucified, stabbed by angry Romans. The lower mind tearing you apart with its demands, demands of the body, of security, of where my next meal is coming from, when am I gonna get laid, how can I run from/mask these fear vibrations etc.

But in January (still Capri-corn – corn is a phallic, fertility harvest symbol) the day’s start to get longer, Jan/John/Jack-in- the-bean-stock/Jesus, will defeat the dragon of flesh, sacrifice the scape-goat and climb Jacob’s ladder to Spring. By April time there will be a spring in his step. By summer he will be the roaring lion of Judah. But then of course he will fall, in Au-tumn, and go to the tomb, when Scorpio stings the sun, and when Sagittarius the Centaur (Sin-Taurus/Moon-Bull) shoots the sun with his arrow.

And round the year we go. The word “year” coming from yah-ram, the Ram of Aries. Yah is the ancient word for moon. And in fact Yah is where we get the words Jew, Judah, Jehovah, the tetragrammaton Yod-Hey-Vav-Hey (Yah-weh). 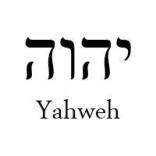 ALL the religions and cultural  traditions we inherited come from Astro-theology, the Astro-logos: the star-words. There are NO traditions or symbol systems that do not come from this.

Star words. Star Wars. Luke Skywalker, Luke/Lucifer the morningstar, walking across the sky, to make day and night, and to make the trip ’round the yah-ram, the yearly Zodiac (Zoo Days/Zoo Divide/Dios/Duality).

Part 3 – The Secret Etymology of English/Anglish