Eric Dubay – The Earth is A Flat Plane

Posted on May 1, 2018 by UponTheFaceOfTheWaters

According to writer and researcher Eric Dubay, the Earth is a flat plane, and the spinning ball model of the Earth is a NASA and Freemasonic deception, carried out as the key element in their mind control system.

Paraphrased from an interview with The HigherSide Chats:

Now you can prove that this is the case as well, with the horizon when you rise up, no matter how high you go, on the top of mount Everest, or in a balloon, we’ve got independent camera footage from a balloon. The horizon remains flat all the way around and rises to the eye of the camera all the way up. Now of the earth were a ball, no matter how big, the horizon is said to be the curvature of the ball, and as you rose up the horizon would stay where it was, and you’d have to look down, if you were in a hot air balloon, you’d have to look farther and farther down as you went up. And the horizon would be below you. But as far as any independent camera has shown us, (meaning not NASA, or any Freemasonic space agency) the horizon stays totally flat and rises to the eye of the observer. So that’s one proof…. 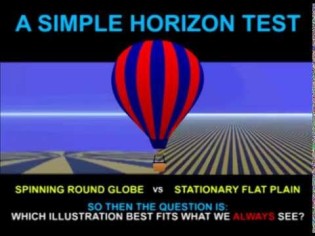 Of course you can measure curvature if it actually existed. The only place that curvature exists is in NASA photos and videos and those can be proven to be CGI fakes, and the early ones were literally taken through a round window to make the earth appear round. It’s just photo trickery and brainwashing that’s got us all thinking that we’re on a ball spinning around the sun with a magical force called gravity, its pseudoscience. Real science has confirmed geocentricity and the flat earth for thousands of years. The flat earth was known to ancient cultures all around the world and it is actually a relatively recent phenomenon that people have been believing we’re on a spinning ball going around the sun. Pythagoras first came up with it about 2500 years ago. He is also sometimes considered the first Freemason. And it didn’t go anywhere much from there until 2000 years later, Copernicus picked it up, another Jesuit Freemason, and he really picked things up along with Kepler, and Galileo, Newton, and now Einstein, NASA and Sagan, Neil Degrasse Tyson, they are all part of this Freemasonic club that is building a pseudoscientific worldview to indoctrinate the slave class so that we can be propagandized into doing anything.

This is basically the biggest thing you could possibly lie about. So the psychopaths who control society and are interested in world domination, the best way to brainwash the whole world, is to lie to the whole world about what the world is. What is the earth under your feet? What is in the sky overhead? Where did we come from? This lie has now evolved into the big bang, evolution, heliocentric spinning ball cosmology, when in reality we are not a cosmic accidental sneeze of nothingness turned everything, this is quite obviously intelligently designed. This thing we are experiencing here, this life, this universe.

Another proof: the distance at which the light from lighthouses that can be seen from sea is just way too far for the earth to be a ball 25,000 miles in circumference. A great example is the Notre Dame Spire standing 403 feet from the foot of the tower, and so with the aid of a telescope ships can be seen on the horizon, and captains declare they can see the spire from an amazing 150 miles away. But if the earth were a ball however, the spire should be an entire mile, 5280 feet, below the horizon. So there are a lot of examples like this where the light should be below the horizon, you shouldn’t see it.

As well as the fact that canals, railroads, tunnels are never built with curvature in mind whatsoever. That’s not necessary, and if they were, then their plans would be off. In fact, I’ve got quotes in many book from railroad engineers saying how it’s hard enough for railroads to make curves horizontally, let alone if we were on a ball, and railroads would have to be curving up on a ball. Trains were made to be on a level, they just can’t operate that way.

THC:“Well where is the edge? Why aren’t people sailing off the edge?”

So in the flat earth model, the North pole is in the middle, and the earth is a disk shape and Antarctica is all the way around, holding the oceans in, so no matter where you are if you go south you will end up in Antarctica. But on the ball model it’s just a little ice continent underneath the ball. Yet in this model it’s all the way around you, holding the oceans in. As for whether there is an edge beyond this ice plateau, this wall that holds everything is 200 feet tall, and once you climb up it’s a plateau of snow that just goes on and on. And the public and myself is ignorant at the moment as to whether there is a barrier, a dome, at some point, or if it is an infinite flat plain and it’s just snow, ice and wind forever. So it’s a mystery as to how the snow actually terminates. These no man’s lands, the north pole and Antarctica, they don’t let us independently explore them. People trying to go without government pre-approval and only going to the places they want you to go, have actually been turned away at gun point, by military vessels, not allowing them to go in. They definitely don’t want us exploring the edges, they keep us in the middle.

THC: “So what about airplanes? People fly from north America to china, all around the globe, or the proposed globe. But this is easy to rectify with your model with the north pole in the center, when you fly, when you think about the rings in a bullseye, it makes it seem like you going around a ball but really you are just going in a circular pattern around a flat plain. If you look at the UN flag, this is the model you are proposing, and it even has an overlay like a bullseye pattern showing you how ships would fly around.”

The UN flag is a flat earth map, and the bullseye over it, if you count the holes its 33, an important number in Freemasonry…so the Freemasons in NASA, in the UN, they are the ones doing this, and meanwhile they laugh about the flat earth, it’s got to be the most ridiculed position ever, and you’d got to think there is a reason for that. Why is the concept of being a flat earther” so ridiculed? There are videos of Obama making jokes about this in his speeches. These are not off the cuff remarks; these are written into his speeches. Why are they doing this? Why are they making sure that people know the flat earth is something to be ridiculed?

“I agree with you on that. I thought that was pretty hair-raising. Because typical people have to assumed that the model of the earth is so rock solid that the flat earth idea is so far past, that it isn’t even on the radar, it shouldn’t even be worth mentioning, considering conventional science. So it is rather odd that that is Obama’s go to…

OK well how about all the satellites orbiting the earth, for GPS systems, cell phones, military radar,  navigation equipment, how do we rectify that?”

Yeah, and they also say there is an International Space Station out there, and there is a Hubble telescope floating out there taking wonderful CGI photoshopped pictures that they send us back with their amazing four hundred mile internet space connection, and now it has gone to a million miles with the new Rosetta mission, the CGI photoshopped pictures from that are just wonderful and well worth the billions of dollars we are spending on them. So the illusion is that there is a space station and satellites just floating out there in infinite space. But you and I know that no matter how high you go, comes right back down. whatever goes up must come down. The illusion is that at some point if you go high enough, this gravity that they say exists, that pulls you back down to earth, suddenly you just pop out of it, and into the vacuum of space. now the vacuum of space cant exists because its connected to the non-vacuum of earth and all the other supposed planets they say exist. So a vacuum must be a closed system. but they claim space is a vacuum, but space is a n open system. so it is philosophically impossible.

The way that they fool us into thinking this is actually plausible is three-fold: first way they do it is in zero G planes, Boeing 747 that do parabolic maneuvers that have a free fall effect that happens for about a minute, where you can be floating in these planes. the second way is through wires harnesses and green screen, for the longer shots. the ISS uses that. The third way for the outside shots they do are in pools, underwater, and this can be confirmed by the fact that there are bubbles rising in some of their shots, and a lot of people on Youtube have dissected a lot of the ISS and other supposed space footage and the space bubbles coming out of their footage, one person wearing scuba gear was even found.

“What about say, all the pilots flying around, and no-one is catching on?”

Yeah and why don’t pilots catch on to the fact that if they wanted to maintain their altitude on a sphere 25,000 miles in circumference, they would have to constantly dip their nose downwards and descend over half a mile every minute. Otherwise they would find themselves higher than expected. You would end up flying out into outer space if you weren’t constantly dipping your nose down. And I’ve talked to pilots, and they never have to do that. But they are just as brainwashed as everyone else, they don’t think if it, or if they do, there is a ready-made answer which is that the atmosphere is being magically dragged along with the spinning ball earth, and it drags planes and everything else with it. They have explanations for everything. 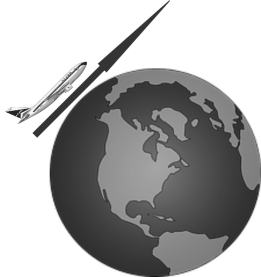 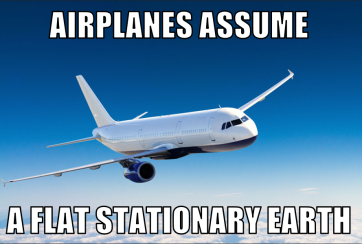 “Yeah we’re told the earth is spinning a thousand miles per hour, which is awfully fast, but a helicopter cannot just hover in the air for twelve hours in St. Louis Missouri and end up in China. But then we are told that in this sphere it all moves relative to itself and you don’t notice those changes. I’m not a physicist and its hard to play devils advocate for their position, but say, if you are driving 90 miles an hour down the freeway, you can play catch with you neighbor and it feels like you are stationary. Or an ant on the dashboard, it doesn’t notice the effect of the vehicle moving at a fast speed. “

But once again it’s explaining away your common sense and your experience which is that you are not moving whatsoever. And so they say, ‘you are moving silly you are just moving at a such a constant velocity that you don’t notice is whatsoever.’ Now even if you are in the best Rolls Royce over the best tar, smoothly going, I close my eyes, I can tell I’m moving and that’s just going 90 miles, not a thousand. Even going up a few floors in an elevator, I can feel that, I have sort of a sensitive stomach…

8 Responses to Eric Dubay – The Earth is A Flat Plane