The 33 Code, ‘As Above So Below,’ and The Barcelona Attack

Posted on September 2, 2017 by UponTheFaceOfTheWaters

“As below, so above and beyond, I imagine,
drawn beyond the lines of reason.” – Tool

In this post we will look at the mysterious number 33 that pops up everywhere in nature, in the occult, Gematria, and conspiracy research.

As Above So Below

A scientist should begin with nature and all things not man-made: the number 33 codes into our bodies and the planet itself. There are 33 vertebrae in the human spinal column, which connect to 33 nervous system groups. The body resonates 33 octaves above the Schumann resonance or the resonance at which the Earth itself rings like a bell. Occultists would look at this as evidence that our bodies are reflections of the universe itself; the microcosm and the macrocosm are, in the last analysis, equivalent. Small and large are illusions, atomic structure with electrons orbiting nuclei is the same as planets orbiting suns, etc. This is the meaning of “as above so below.”

Mystery schools have been obsessed with the number 33 since their inception, the Kabbalah has 33 paths through the Sephiroth, the Freemasons have 33 degrees, etc.

Bob Fischer in his work covers this in more detail, “Richard Hoagland has connected Scottish Freemasonry with NASA. At Cape Canaveral, the two launch pads of Apollo space missions, the runway 33 is 33 degrees west of north. Astronaut Buzz Aldrin is on the moon holding the flag of Freemasonry. Why 33? Jesus is said to have performed 33 miracles, died at age 33. King David, father of Solomon reined for 33 years…The UN emblem divides the Earth into 33 sections. The great seal at the back of the dollar bill. The obverse side, with the eagle, lets count the feathers on the wings, the left 33, the right, 32….”

In Eastern cultures 33 appears as well, according to ridingthebeast.com –

Perversion of the Mystery Teachings

While I believe mystery schools which have employed the 33 code began as a benevolent force preserving ancient key knowledge about the micro- and macrocosms, at some point in history many of the schools were hijacked and coopted by dark forces which we can call the Dark Occult or the Illuminati, and they have been using the 33 code and other ancient symbolism ever since, for sinister reasons, such as terrorizing the masses and implementing their dreaded Orwellian New World Order.

Their favorite method of terror is the infamous false flag. An event has the stamp of being an orchestrated false flag when it happens along astrologically significant dates and times, and when within their headlines by the Illuminati-controlled mainstream media, we see numbers and patterns which employ this 33 code and other numbers that have occult significance.

Again does this mean that gematria, numerology, astrology and the occult in general is evil and demonic? No! These knowledge systems have simply been coopted by sinister forces using them for their own dark agendas. Part of the mind control is getting us to think of the occult as the work of the devil. The occult simply means hidden knowledge. Knowledge is neither good or bad, it is how it is used that carries a moral distinction.

One researcher who goes very deep into the 33 code within recent false flag events is Youtuber Zachary Hubbard. Now a disclaimer about this man. I was born and raised in a Jewish family, so I am bothered to no end by his Anti-Semitic rhetoric, but as a researcher I must separate the man from his work, as I believe a lot of his material is accurate and informative regarding the Gematria code, I just don’t agree that it is a Jewish conspiracy, it is a group of people happy to masquarade as Jews and throw them under the bus, but are really Satanists and Dark Occultists.

(Note: Another very good researcher into this dark Gematria Code is ExtraCapsa’s blog.)

Let’s look at Hubbard’s break down of the recent terror attack in Barcelona Spain, where a van supposedly rammed into a crowd, to see this 33 Gematria code in action. Keep in mind when you hear about terror attacks that many of them may be false flags (Illuminati orchestrated) and that some of the false flag attacks may not be attacks at all but hoaxes (mainstream media lies or fake news) where no-one was even hurt or killed. Not all false flags are hoaxes however, sometimes real people die, so we must research this area very carefully and not jump to conclusions. A good scientist does not believe anything, but simply holds and tests the weight of a given set of hypotheses, until these hypotheses give ground to new ones….

Hubbard: “In Spain, they are reporting 1 dead, 32 injured. That’s 33 people. What is 33 in the language of Gematria, the ancient practice of coding numbers into words? That’s the number of ‘police’ and ‘false flag,’ (full reduction, Gematrinator.com). 33 is coded into all false flag propaganda in the media. And all these stories come through the ‘Police’ = 33 (full reduction). Police are controlled by ‘Masonry’ = 33 . Masonry is a secret society, Secrecy = 33, like the word Order = 33. In the United States of America, D.C., headquarters of the federal government, Federal = 33. U.S. was founded by Freemasons who came over from Europe such as Spain where today’s terror attack is, think about Christopher Columbus, the Spaniard, C.C. – C is the 3rd letter, (33), he sailed and discovered the Americas which = 33, where the Native Americans already lived which he called Indian = 33. Our entire history has been contrived by this code, these numbers are used in ritualistic fashion to shape our understanding of history and the present. There are other numbers besides 33 but we are focusing on it here. Charlottesville codes 33 as well. This terror hoax pattern will continue until we put a stop to it. I even made a joke about how often they are ramming cars into crowds now. And here we are again. When we saw the early media images there was no sign of a van, no sign of injured people, but there was a lot of police around.

The headline from CNN said “One dead, several hurt in Barcelona terror attack,” which codes in reverse ordinal gematria to 666. 666 is closely related to 33. Genesis = 33 just like the word Birth = 33 just like the word Seed = 33. Genesis means “in the beginning” which equals 137 which is the 33rd prime number. All of these numbers behind the letters comes from a biblical code which comes from the Torah which begins with Genesis. What you need to know about Genesis using the Sumerian cypher which is multiplying x 6 for the ordinal methods, Genesis also equals 666. This is a biblical number from Revelations 13:18 where it is written in the form of an Isopsephy riddle. “Isopsephy” is the Greek practice of coding numbers behind words, and they are thousand of years old. They would write a number and then a riddle, and the person would have to solve for what word that was. In the bible it tells that the number of the beast is 666, ‘Isopsephy,’ what the riddle is, is 666.

So here is how 666 connects to 33. When you write out “thirty three,” it sums to 156 in English Ordinal. When you write out “six six six,” it sums to 156. In Revelations 13:18, 666 is “the number of a man” which equals 156 (english ordinal) and 66 (full reduction). “Here is wisdom” sums to 66 just like “number of the beast,” just like Revelations is the 66th book of the bible, “Mankind” = 66. Mankind was created on the 6th day. In Sumerian, “Humanity” sums to 666. When you know this method you will see through a lot. In Revelations the beast rules for 42 months, when you write out “forty two months” you get 66 (reverse full reduction). The New World Order operates by a code, that you can see through if you learn the language they are speaking which is Gematria, which is Isopsephy.

“Deadly Terror Attack In Spain,” the latest CNN headline, codes to 112, which is the emergency dialing code in Spain and the majority of the world, also true of the U.S you can dial 911 or 112, you will be connected. 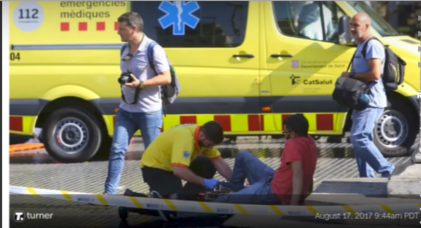 This image is from Turner = 33, just like Cameraman = 33, the people that sell us out on the daily. And you can see the 112 on the emergency vehicle.

The attack also occurred in Las Ramblas, Spain. Las Ramblas codes to 26, which syncs up with the date of the attack 8/17/2017 (8+1+7+2+1+7=26). Like I just explained with Charlottesville, every false flag terror attack is synced up with the date and location in this way, without exception.”

2 Responses to The 33 Code, ‘As Above So Below,’ and The Barcelona Attack