Was Dave Chappelle Killed and Cloned By The Illuminati?

For those who are new to the conspiracy world this question admittedly sounds absurd. In order to even begin to explore it with an open mind, one must first be convinced that there is a possible perpetrator, possible means and motive.

One must first become aware of the:

Dave Chappelle is one of those famous people who was not born into fame. The Illuminati prefer to put their own bred stooges into positions of power, whether politicians or celebrities. If it can’t be one of their bloodlines than it is an MK Ultra victim, for example Britney Spears, Katy Perry, or Kanye West, someone who they have brainwashed since infancy, someone they know will follow their agenda. They also gather people through blackmail and sellouts, they like people so desperate for fame that they will sign a contract in blood, selling their soul to the wicked industry. These are the people like Jay-Z who know what is going on but do not care, as long as they get their paycheck.

Dave Chappelle, at least initially, did none of these things. He was unique in that regard. He got famous with stand-up and eventually got his own show on Comedy Central called the Chappelle Show. Since he was an independent writer/actor/performer, he had free rein on this show and what we saw in those two seasons was something fresh, original and not scripted by the Illuminati. There was no hidden agenda, just an honest look at race, society, and whatever Chappelle felt like covering.

Now according to his cousin’s testimony, at this point Dave was called into the executive’s office, and was seated at a round table of rich exec Illuminati types who basically told him he needed to cut out some of the material that he was doing. Specifically they had a problem with his depiction of black people. They didn’t like his honest take on certain characters and portrayals because, according to his cousin, they were grooming Obama to become the next president, and felt this being threatened by Dave’s show. When Dave refused to compromise his creative license and artistic vision, they offered him $50,000,000 to change the show to the way they wanted. Again Dave refused.

He left that meeting badly shaken. It sounds like he had a run-in with the Illuminati and was feeling implicitly threatened by some very powerful people. It was at this point that he fled to Africa. The media portrayed it the same way they do whenever a controlled celebrity begins to break down due to Illuminati pressure: they say he or she is having a psychotic break, a meltdown, a mental breakdown, you name it. They said Dave was overwhelmed by the fame, couldn’t handle the pressure. Dave had nothing of the sort. He loved the limelight. No, he experienced a brush with something very powerful and sinister and was scared out of his wits. He was careful not to name names or get specific about it during interviews, but if you read between the lines and combine that with his cousin’s testimony, you get a clear picture.

He needed to get away, so he went to Africa, without even telling his wife. He told his brother and his cousin, and called his wife once there, but didn’t give his specific location. Sounds like someone trying to evade an assassination to me.

In the end it was his love of the limelight that would be his downfall. If what his cousin is saying is true, he should have stayed in Africa. He came back, and initially laid low, doing local standup shows but refraining from returning to Hollywood and television. But eventually he felt the need to talk, he needed to tell his story to the world. So he went onto Oprah. 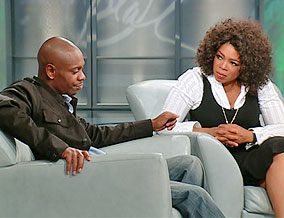 When you watch the Oprah interview, you can see that she is playing her Illuminati part, in trying to portray him as someone who broke down from the fame, buckled under the pressure. Dave’s body language looks like a broken man. Clearly he is conflicted at this point, wanting to return, to tell his story, to possibly get his show back, but at the same time confronted by Illuminati devils everywhere he turns, trying to control his movements, his image, his story. I no longer trust Oprah, she does not come across as sympathetic to him in this interview. She seems like a money grubber who sold her soul who doesn’t understand why he would turn down a fifty million dollar contract.

According to his cousin who doesn’t wish to be named, it was not long after the Oprah interview that Dave Chappelle was killed and cloned. The way they did it was by luring him back into the Hollywood executive office, back to the round table of exec types who push the Hollywood agenda, by offering him his show back, with full creative license to Dave. Sounds too good to be true, but Dave fell for it. It was his love for the show that did him in. His cousin warned him, “don’t do it, it’s a trap.” But Dave wanted to believe. Dave promised his cousin that he would call her right after the meeting with the executives. She never received and still has not received that phone call.

She tried calling his cell shortly after the meeting. Someone else picked up, a stranger’s voice, who told her that Dave was not there and hung up. She tried again and the phone became disconnected. She believes the Illuminati took Dave to an underground base where they sampled his DNA and murdered him. Then through the use of something called organic robotoid cloning, they grew a new Dave in a matter of hours (update: it apparently takes about 5 months to grow a clone). Now with clones, they are going to look similar but not exact. They had this problem before where family members recognize that the person coming home to them is not their loved one. Oddly enough, Putin’s ex-wife testified about this same thing, a few years back. Since they knew Dave’s wife and kids would not be fooled by the clone Dave, they killed and cloned them as well.

Where is Dave Now?

Now it is not just Dave’s cousin’s testimony that suggests this could be true. When you look at recent pictures of Dave, there are some clear physical differences.

Clone Dave on the left is way buffer, even his skull shape is rounder, it looks like he is on steroids. He is holding up the “six” sign representing the triple six, a common hand symbol you see Illuminati celebrities doing. The old Dave never took part in these things.

If you look closely at the mustache of clone Dave on the right, the pattern of hair growth is quite different than the old/real Dave on the left. The nose is wider, the eyes look dull and dead like that of an MK Ultra victim. The skin tone looks different as well.

By now you can guess which Dave is which is the above two comparisons. Different body type, skin tone, shape of skull, etc.

Here we see clone Dave rolling up the one pant leg, which is a Freemasonic ritual. The old Dave was Muslim, it looks like the new Dave is a Mason. Some people might just look at that and assume he sold out to the Illuminati, again I don’t think so, the old Dave, dare I say the REAL Dave would not have sold out, he was vehemently opposed to losing his creative and artistic integrity. This is what made his material so fresh and popular, it was not canned, contrived Illuminati propaganda which is rampant in Hollywood.  If you watch his new material however, it does have that contrived, prewritten feel to it, it feels like he has a scriptwriter now. 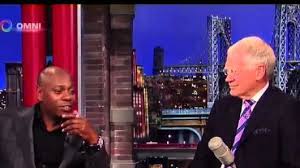 His recent appearance on Letterman raised some red flags for me. Letterman is asking him about his turning down fifty million dollars  and then why he changed his mind, and Dave answers, “well I can’t feed my kids on integrity…” implying that he took the contract in the end for his family, which makes no sense because his family would have lived quite comfortably for the rest of their lives on their ranch in Ohio without additional millions of dollars. The old Dave even mentioned on Oprah how he would only take the contract if he could give the money away. So we see a complete 180 here in terms of his attitude towards money. I smell an Illuminati agenda here….

The Cloning Theme Disclosed In Hollywood

As conspiracy researchers have pointed out, everything the Illuminati does behind the scenes, they like to disclose in movies, TV shows, and even subliminally in mainstream media. There are a number of theories as to why this is.

Human cloning is not a new theme in the science fiction world by any means. In mainstream science, you would think that if we can clone a sheep, than we can clone a human. It is the ethics of it, not the science, that is holding human cloning trials back. But as we know, the Illuminati have no ethics to hold them back, so it is not hard to believe that they are already doing this.

Orphan Black (tv show), Nikita (tv show) and The Island (movie) are three fictional disclosures of human cloning that seem to have the feel of an underlying Illuminati narrative. In the “The Island,” fully grown adult clones are made in a secret lab, and used to replace the failing organs of their rich original counterparts, who live out in the real world. The clones are kept in underground isolation, in a brainwashed childlike state (reminiscent of MK Ultra) until they are needed by the originals. So the idea that an adult clone can be manufactured in a short span of time and deployed into the real world by secret agencies is introduced in this film.

In Nikita, we get the idea put forth that powerful world leaders around the globe are slowly being killed and replaced by clones that are fully controlled by a rogue agency within the CIA simply called, “Division.” Division’s goal is to replace all world leaders with their own stooges in an attempt to form a one world government. In light of this it is certainly creepy to hear Putin’s wife testifying to this very thing. And now with Dave Chappelle’s cousin’s testimony, we can see that when famous celebrities begin to say the wrong thing, begin to expose their secrets, and simply cannot be controlled, they can be killed and replaced as well. Researcher Jim Fetzer has written articles showing how Hillary Clinton may have at least one double, possibly two. He believes she is dead and has been replaced by a look-alike. It may not be a clone but simply someone who looks quite similar. 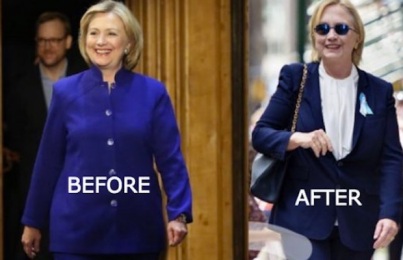 References, and to go further down this rabbit hole:

Note: I originally listened to the the interview with the cousin here:

It has since been mysteriously removed from Youtube. Good luck finding it again….

Jack Black and Bernie Mac (both comedians, to make it seem like a joke) mention cloning:

7 Responses to Was Dave Chappelle Killed and Cloned By The Illuminati?