The Earth Is In Quarantine: Michael Tsarion

Posted on January 18, 2016 by UponTheFaceOfTheWaters 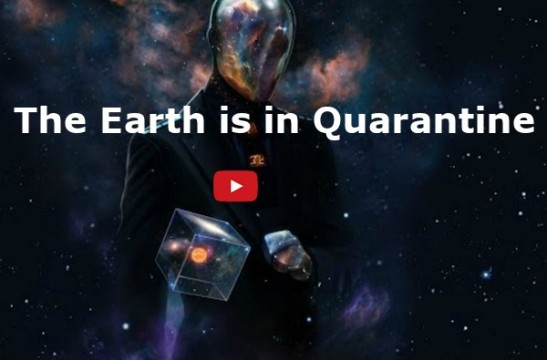 Michael: “More than 30,000 written documents from around the world tell of advanced beings who came to earth or were already living on the earth. The word Nephilim means those who cast down, not came down. An Indian document tells of a demon race that invaded three planetary systems. Opposing demons was the Hindu God Shiva who possesses a powerful weapon he fired at the enemy airships. Many of these documents were taken out of the Bhagavad Gita, when they came to passages like this they would skip it, they knew about what it would mean. Who are these beings that fly in a cloud like doves to their windows? Who are these personages?

I’d like to go into that, and explain the background of our history. It turns out that about fifty thousand years ago the Sumerian records always talk about visitations by aliens and the stories tell of  race of beings, expelled from their planetary system. There are different views about whether they are from Sirius, or the Pleiades. These beings had space travel, were far advanced. We have information all down through society about the strange vehicles and visitation. In the book of Ezekiel there are strange visions of things that resemble space ships. The Temple of Abydos in Egypt, has carvings on wall that look like submarines and helicopters.

As these beings got into our system they landed at Tiamat, it must mostly oceans, this atmospheres was so luminescent  it was also called Lucifer, a second sun. They were being pursued, and they landed on another planet in our solar system (Tiamat). Set up a dummy base to send pulsations out. When their pursuers arrived, they thought they were on Tiamat, so they incinerated Tiamat. All of its content are the asteroid belt, and Charles Fort made a life study of these anomalies, frozen fish, ice from the sky. They thought he was as a crank. The debris up there, Tiamat was an ocean planet so frozen chunks of ice and fish make sense. The fish are alive, because of the refrigeration, and can be re—animated. These aliens came here, went into the tunnels, and caves and oceans, they had to because of earth changes, the flood which destroyed their first civilization. That’s why the Jewish and Celtic texts talk about the Gods coming out of the waters. Atlantis was their civilization with all their technologies. These being interacted with us, now our planet since we’ve been on this planet as hunter-gathers we probably have been visited by cousins and brothers from other solar systems, but the policy of most of those groups has also ways been to come and do your research but not interfere in the actual destiny of the indigenous beings the homo sapiens and Neanderthals. Better not to even be seen. But these beings were what you’d call in Milton “fallen angels,” better to rein in Hell then serve in Heavenand they had an agenda that did want to interfere with the homo sapien at that time. So they started to corral and research all the different types of people on Atlantis. At a certain point, thousands of years later, genetic changes were done. All the humans were changed or subsequently phased out. and the being they created was called homo atlantis. a being that has pure alien DNA and pure human DNA, homo atlantis: from which we are all descended. but the poetic euphemism to these people was called the sons of the serpent, the brotherhood of the snake or the serpent people. Not because they looked like serpents, but for reasons we will come to in a minute. the first progeny of the fallen angels was the sons of the serpent. thats why it says in the bible lets make man in our image, after our likeness. they are telling you all about this. and the word genesis means the genes of the goddess Isis. And when the bible uses the word “created” its actually more like our word for build or construct.

Now why would the angel of death or god, in pharoah’s time, or even Herod, what would be the importance of killing the first born of your enemies? The first born is another one of these cryptic terms for sons of the serpent race, or the children of the Elohim. some people might want to call the original serpent masters  “the Jehovah clan” and others might want call the fist born the “Elohim.” Now, Christians wont understand this, because when you use these terms like that you should think less of an individual and more of a race, than it starts to make sense.

Now they created this first born to serve them, by combing the human and alien DNA together, at the place called Atlantis, but, as time went by, maybe 100’s of years, its hard to know, but we have from that time the great deluge, when Tiamat was destroyed created enourmous cataclysms. But at least it slowly subsided over time. But anyway when they created this first born, they sent them out be their servants, to go out in the garden and do their physical work for them. But after time, since they had human DNA,  the humanism, the sense of spiritual connection to things, that their fathers didnt have, the felt they shouldn’t be subserviant and do this work anymore. They had the high intelligence and the divine spritual connection. So they left. And re-situated their own civilization on the continent of Oceana or Lemuria. Leaving their alien fathers with a predicament as to what to do. So they went back to the drawing board to create a different entity. The Papal Vu text says “Let us make him who shall nourish and sustain us. What shall we do to be invoked? To be remembered on Earth? We have tried with our first creatures, but could not make them venerate us, so lets try to make obedient respectful beings who shall nourish and sustain us.” This is from the Mexican Papal Vu. You know the conquistadors how many books they burned? You want to know why? If this is one little piece of one little book…The first creatures wouldn’t do it, so we go to the second…..(to be continued)”

2 Responses to The Earth Is In Quarantine: Michael Tsarion