The Age of Illuminati

Posted on December 12, 2015 by UponTheFaceOfTheWaters

Inspired by the novel “Broken Symmetries: Age of Illuminati” by H.A. Ormziar 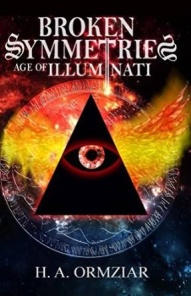 Agents of the cunning deathtrap

“The only sin is worshipping false idols”

The Antichrist has technology on its side, unfortunately.

The Illuminati has the grip on mind control, in other words.

“Jews own Hollywood.” Haha, its deeper than that.

Hollywood, a system of mind control.

It, and the two party system of politics will bend to superbillionares funding secret science experiments.

Transhumanism, the name of the game.

But really, carbon based lifeforms are more adaptive, malleable.

A.I. supercooled conductors, with a persons brain patterns digitized, copied into computer code and buried under 200 miles of uranium and other heavy metals, claim to survive a meteor or any other cosmic catastrophe.

But Illuminati have it wrong see, A.I. minds while seemingly immortal and powerful at processing lots of data, cut out the soul, the spirit, the spark of emotion, which nature has been working on since we were worms, fertilizing the earth; the game of genetics or self-reproducing genes and natural selection, allowed for by the gentle warmth and location of the of planet earth. Such geophysics has proven to be rare in this galaxy.

The powers that be or New World Order,  are paranoid of a meteoric catastrophe destroying the species on Earth. Thus the affiliation with A.I. which is seen as being more stable.

Mars can house A.I. brains and build cities with 3D printing technology.  But this faction is at war with the faction that wants to keep the door open to the flesh and carbon. “Organic life uses the four most prevalent elements in the universe: carbon, hydrogen, oxygen and nitrogen.” Our higher power rests on the molecular complexities and potentials of carbon-based life.

But what of a nuclear blast? Can we risk the soul?

Well the other course is autistic, sociopathic.

Anti-Christ. Christ = a symbol of the self.

God from within, faith guide us.

He dreams of “The day of judgement” which is like the Wizard of Oz:

A man behind a curtain, pretending to be more than he is. With shadow effects and amplication, he achieves God status to the gullible masses. But Dorothy sees through the façade that in the past Zeus, Nimrod of Babylon, and the Pharoahs of Egypt managed to convince their audience.

But now Hollywood writes reality for the conscious undiscerning mind, and Youtube is like the subconscious, crystallizing truths through memetics, and little by little attention to pattern exposes conspiracy.

Memetics = the sister of genetics. An evolving, self-replicating form on the information grid of the web. The internet: an unconscious housing of mind, concretizing patterns that slip through the controlling media forms of TV news and Hollywood.

Now we get the true story as language reveals the true forms through the memes of Illuminati as synonymous wth Anti-christ. Anti-illuhim, anti-God from within, Illumin-Anti.

The bible is a coded text, which to the initiated few reveals a prophecy of this war between Christ or (God within, faith in mother nature) versus the Antichrist or artificial intelligence and mind control. It is really a fight between freedom and servitude. If we are not careful, we really will become slaves in Egypt, slaves to a false god, a human idol who disperses our essentials like food and shelter. Through the seeming miracles of transhumanism, one false turn and we will lose our freedom to thought and freedom to express our unique personalties without fear of persecution or censorship.

But if we trust in the Messianic symbol, perhaps a charismatic leader, a new Moses or Jesus teamed with a genius scientist will show us a better way to preserve the soul, to replicate dying souls into fresh wetware. Wetware without cybernetics. Self replicating Wetware without the cost of constant  threat from cosmic catastrophe, which at the present would wipe out the wetware replication system. Perhaps the hollow earth theme, turning the planet inside out, is the answer. Another idea would be harnessing black holes to create time loops or “pockets of eternity.” This could in fact be what the DMT flash is all about.

Can we have faith that the psychedelic flash that occurs as we die bring us into these eternity pockets anyway? Are the efforts of transhumanism unnecessary? What really is the purpose of man’s evolution over control over environment? We all crave power over death in the dissolution sense, but without the loss of connection to a power greater than ourselves.