Posted on August 11, 2014 by UponTheFaceOfTheWaters

Playwright Myron Fagan encounters secret documents regarding Roosevelt and Stalin teaming up to allow Stalin the control of Berlin, the Balkans, and Eastern Europe!

He describes the One World Order enslavement that was launched two centuries ago by one Adam Weishaupt who was financed by The Rothchild Banking Family.

Backed with documentary evidence, the Illuminati fomented all the wars during the last two hundred years and became the prime instrument to achieve the agenda of the New World Order.

“Around 1973, I became convinced for a while that I was receiving messages from outer space. But then a psychic reader told me I was actually channeling an ancient Chinese philosopher, and another psychic reader told me I was channeling a Medieval Irish bard. And at that time, I started reading neurology, and I decided it was just my right brain talking to my left brain. And then I went to Ireland, and I found out it was actually a six foot tall white rabbit.” – Robert Anton Wilson

The rabbit smokes and calmly hums,

and plays another card. Lincoln chuckles

“the queen of 3’s that card is just for chums.”

The lizard plays, in retrograde,

his pair of Sirius moons,

and collects the pot, what a sorry lot,

But Wilson insists on 27 conspiracies going on at once. It’s not so simple. These illuminati, are they genuine people or are they representing the lizards of the lower 5th dimension?

While the boy is morphing into a yeerk, in truth the yeerks are brain slugs, going through the ear canal to control their victim. A holy battle between the good and the bad aliens, Applegate’s young adult novels that i read as a kid eerily foreshadowed what Icke and Maxwell are saying, what Sitchin and his Sumerian tablets are saying.

The yeerks have to recharge every now and then in secret pools where they swim around absorbing nutrients. Their victims are held captive in cages during this duration. All Applegate left out of the story was the sacrificial victims, the pedophilia and blood drinking of the mad elite, the Satanic brotherhoods. So I ask again, are they people or reptilians?

Remember, Wilson reminds us that the entities need not be named, classified. Icke refers to them now as “vibrational fields” after getting so much ridicule to his reptilian metaphors. But again, the entities could just be the left and right brain talking, or the giant bunny from space. 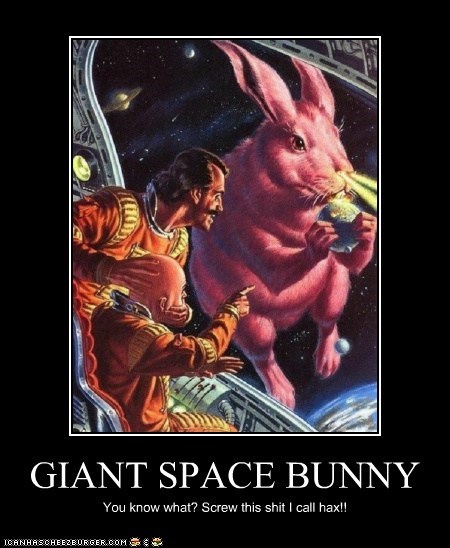 The giant space bunnies are nevertheless, shapeshifters, telepaths and psychic manipulators. They are ancient races that feed off our psychic energy, because they exist in the psychic realm. They are also in control of the major banking families and royal elite. They spawn decadence and decay by Problem Reaction Solution, “holy” wars, and funding both sides of the divide. According to Maxwell the Vatican is their stomping ground, so are the freemasons and other cults they have wormed their way into. Many American presidents and british royalty are in fact controlled by yeerks and this is why they are into blood ritual and pedophilia. They sold their souls for power and financial gain. Fagan notes that one of the major tenets of the illuminati manifesto is to control high ranking people through manipulation, temptation, and blackmail. These people than become their agents.

This entry was posted in Uncategorized. Bookmark the permalink.